Here are some interesting buildings and places to look out for on your visit to Hunstanton. 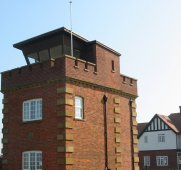 Built in 1907, it was a Marconi listening post in both World Wars, and is now a private residence. Location: On the cliffs at St Edmund's Point.

Cross on the Green

Origins unknown, but thought to have been brought from the green in Old Hunstanton at the time when the Golden Lion Hotel was built in 1846. It may once have been the old village cross from Snettisham. Location: The Green, Hunstanton.

Lists the names of the 31 people who died in the east coast floods of 1953. 16 of the victims were resident American airforce men and their families. The deaths occurred in South Beach Road, Hunstanton to the south of the fairground. Location: Esplanade Gardens.

Opened in 1846 and originally named The New Inn, this was the town's first building. See also Golden Lion Hotel. Location: The Green, Hunstanton. 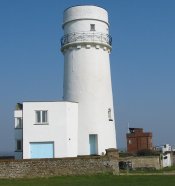 The present lighthouse was built in 1840 and ceased operations in 1922, since when it has been a private residence. A lighthouse has been on the site since 1665 and the world's first parabolic reflector was built there in 1776. Location: On the cliffs at St Edmund's Point. 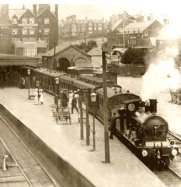 The railway came to Hunstanton in 1862 and brought many thousands of visitors, triggering a rapid expansion of the town. The line ran from Kings Lynn and had the 'royal station' at Wolferton. It closed in 1969. Location: Car park alongside Le Strange Terrace. 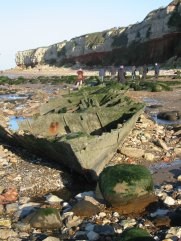 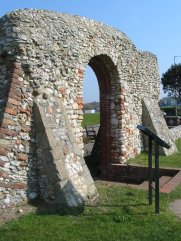 Built in the 14th century and restored in the 19th century, the church has a Norman font and a roof made from oaks grown on the le Strange estate. Location: Church Road, Old Hunstanton.

Originally Heacham's (not Hunstanton's) water tower, this was converted into flats in 1984. Location: Top of Redgate Hill.

Hunstanton Heritage Plaques are on buildings and sites of interest in Hunstanton and Old Hunstanton. The plaques, inscribed with the historical relevance of each site, were placed by Hunstanton Civic Society. A leaflet listing the sites and showing their locations is available from the Tourist Information Office. The table below lists the locations of heritage plaques.